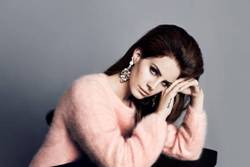 Lana Del Rey, one of the biggest names in music, will be the face and voice of H&M this fall. Lana will star in a print campaign shot by Inez van Lamsweerde and Vinoodh Matadin, as well as in a full-length film of Lana singing a cover of “Blue Velvet”, shot by director Johan Renck. Lana became an instant worldwide star earlier this year with her single “Video Games” taken from the multimillion selling album “Born to Die”, and is known globally for her distinctive personal style. For the print campaign, Lana wears the best of H&M’s fashion for fall, from a pink angora blend sweater to printed leggings, a tweed biker jacket and a tweed figure-hugging faux leather trimmed dress. The film is a fully-plotted music video starring Lana as she sings “Blue Velvet”, which will be available to see in its entirety at www.hm.com from September 19, with edited versions used as a TV campaign. Lana will also star in a second print campaign later in the season, featuring the best of winter fashion. These images will appear in October, both in print and also in-store.

Work in the fashion industry and develop fashion websites. My primary fashion website is called Apparel Search and can be viewed at www.ApparelSearch.com My second largest site is the Fashion Industry Network which you can view at www.FashionIndustryNetwork.com
View all posts by Clothing Industry Guide →
This entry was posted in Fashion Blog and tagged H&M, Lana Del Rey, video. Bookmark the permalink.
Loading Comments...